Warning:  The FDA has banned the use of Sassafras because it has been determined to cause cancer in laboratory rats.  As such, sassafras is considered a controlled substance and can not be sold in processed food products such as bottled root beer for the retail market.

Here on Vaughnshire, our woods contain a old fashioned ingredient that old timers used to use to make a delicious carbonated beverage know as root beer.  That ingredient is the Sassafras root bark from the Sassafras tree.

This wholesome drink, which was made every spring in the households of our American forebears, is a delicious as well as healthful, and it is a pity that the use of genuine root beer is dying out.  The sarsaparilla, yellow dock, dandelion, burdock, and hops used for its making were all products of the nearby woods and fields.  Bark of the wild cherry was sometimes put in, birch bark also, and elecampane, and the aromatic spikenard.  In springtime children went out with a trowel and basket, and their intimate knowledge of the growths about them helped to their brewing. (Homemade Root Beer, Soda & Pop

Last week we made trip into town and went to Trader Joe’s to pick up a few grocery items.  I bought some all-natural root beer and ginger beer which spurred on the kids interest in making our own homemade soda and pop.  I had bought the book Homemade Root Beer, Soda & Pop

over a year ago.  The kids eagerly picked it up and started reading…and soon started asking anxiously if we could make the homemade root beer.

Little did I know that we already had the ingredients available to start a batch of root beer.

My 12 year old read the directions on how to make homemade root beer with great interest and then exclaimed…”We have Sassafras!” before he ran out the door.  A little while later, he came in the house dragging cut branches and dirty roots from the Sassafras trees located in our woods.  A few of the older children started to cut and clean the roots, while another one read the directions out loud.

They started with cutting the roots off the Sassafras sapling trees. 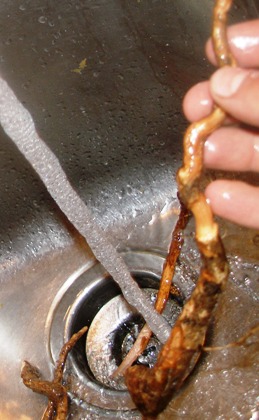 We were all amazed at the smell of the sassafras roots.  They smelled like root beer! 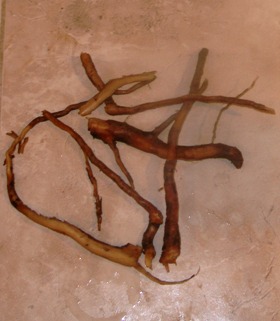 We were not exactly sure how many roots to use for one batch (about a gallon).  The recipe we were using said use about 20 inches of sassafras root, the thickness of a pencil.

Here’s the recipe we used: 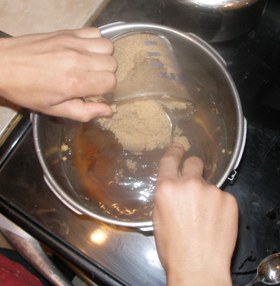 1.)  Place the root and vanilla in 2 quarts of water and simmer, uncovered for about 25 minutes, adding the sugar near the end.  The water should take on a pronounced red or dark orange color and the room should be filled with a strong sassafras aroma.  If color and aroma are weak, add more root.  Remove from heat and let cool for 30 minutes. 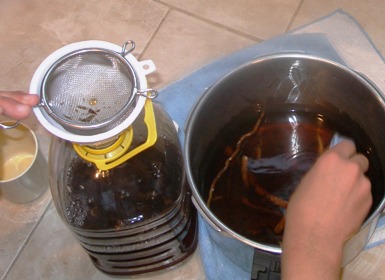 2.)  Put 1 quart of cool water into the jug.  After the sassafras mixture has cooled for 30 minutes, pour slowly into a jug.  Add water to the jug, leaving a headspace of about 2 inches and aiming for lukewarm overall temperature.  Allow to cool if it is above lukewarm.  Cap the jug and agitate vigorously. 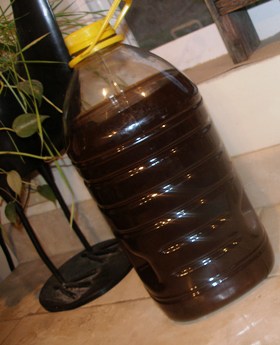 3.)  In a teacup, combine the yeast and 1/4 cup of lukewarm water, and let sit about 5 minutes.  Add the yeast liquid to the jug, agitate, and then bottle the beverage.  After about 48 hours (check sooner in warmer weather) check the carbonation;  when sufficient, refrigerate. 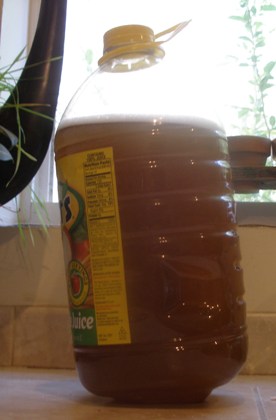 The next day, we checked our brew….the fermentation process was definitely working.  The jug was bulging and there were bubbles around the top of the liquid.

We released some of the pressure and checked for carbonation.  It was very weak carbonation, so we capped it and left it to do its work the rest of the day. 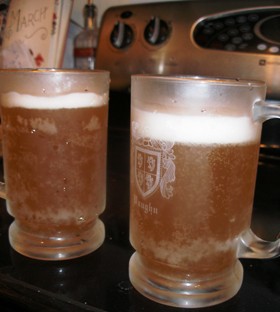 After about 36 hours, we had a pretty carbonated root beer beverage!  It was very exciting for all of us!  We enjoyed our homemade root beer for lunch with our ham sandwiches!

We were pretty impressed with the carbonation.  It is truly an amazing thing that you can ferment something with yeast and end up with something carbonated!

We made another batch of root beer with some alterations, this time steeping the roots overnight like you would an herbal infusion.  The first batch tasted good, but we wanted a stronger root beer taste.  We also added a bit of licorice root and a bit of cinnamon.  We also bruised up the roots before simmering to release a bit more of the sassafras aroma and taste.

Our next batch is fermenting now so I’ll post the results when it is finished.

If you are interested in making your own homemade root beer or ginger ale, I would highly suggested getting a how to book on the subject.  There is a lot that goes into the process besides just reading a recipe.

This is the book that we have been using.  It has been very informative and educational:  Homemade Root Beer, Soda & Pop