In my post Theodore Roosevelt – Larger Than Life I completely underestimated the complexity of one of the greatest occupants of the American white house. Truly, I don’t think there could be a more complex person to write about. The oddest part of it all is that Teddy Roosevelt did not consider himself anything beyond average. In an assessment of his own ability he wrote:

In most things, I am just average; in some of them a little under, rather than over. I am only an ordinary walker. I can’t run. I am not a good swimmer, although I am a strong one. I probably ride better than anything else I do, but I’m certainly not a remarkably good rider. I am not a good shot. I never could be a good boxer, although I do keep at it, whenever I can. My eyesight prevents me from ever being a good tennis player, even if otherwise I could qualify. I am not a brilliant writer. I have written a great deal, but I always have to work and slave over everything I write. The things I have done are all, with the possible exception of the Panama Canal, just such things as any ordinary man could have done. There is nothing brilliant or outstanding in my record at all. page 125 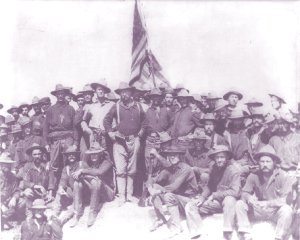 Here is an average man with his average Rough Riders!

Not only was President Roosevelt an incredible leader as a statesman, he also excelled in many many other subjects. His son Archie said, “In one afternoon I have heard him speak to the foremost Bible student of the world, a prominent ornithologist, an Asian diplomat, and a French general, all of whom agreed that Father knew more about the subjects in which they had specialized than they did.” He was a ferocious reader, who on an average week, would read six volumes. On a better than average week he would read more. Lord Charnwood said of him, “No statesman for centuries has had his width of intellectual range”.

While finding time to read this wide range of subjects he also found time to write and share his knowledge with the rest of the world. He wrote 43 books in his lifetime ranging from his classic work “The Naval War of 1812”, to wild west adventure stories, to insightful biographies on such men as Gouverneur Morris, Oliver Cromwell, and of course his auto-biography. His volume on the Naval War of 1812 is still studied at the Naval Academy today and was published when he was 24 years old.

There are many other interesting facts and intricacies about the man who was Theodore Roosevelt, but my favorite aspect of his life is that of his family. While not a perfect father he was an active father and a very involved father. Dr. Grant tells of a visit to the white house by the Japanese Ambassador who was surprised to find the leader of the free world on his hands and knees chasing a “gaggle of children” down the hall outside the oval office! It was his home, that is his family household that was his source of strength. His family was not another item on his to-do list in another long day of details, but it was the very foundation that made him who he was. He said:

There is need to develop all the virtues that have the state for their sphere of action; but these virtues are as dust in a windy street unless back of them lie the strong and tender virtues of a family life based upon the love of the one man for the one woman and on their joyous and fearless acceptance of their common obligation to the children that are theirs.

If your looking for a good biography, I could not recommend one stronger than, Carry a Big Stick, The Uncommon Heroism of Theodore Roosevelt, by George Grant.