I hope to pick up farm blogging again.  So much has happened around here.  The biggest change we’ve been dealing with is learning how to adjust with 9 children.  Our little newborn baby is beautiful and with that wonderful package comes 24/7 care with lots of laundry, sleepless nights and exhaustion.  We’re not back up and running yet, but I am seeing some light at the end of the tunnel.  Or maybe we’re just getting use to the lack of sleep?

Our life continues to gather more and more speed and pick up more and more things to juggle.  It’s not a simple farm life around here contrary to what many may think.  Maybe I should rename the blog…The Not So Simple Farm Life Blog?

Our hot summer quickly turned into a dry unimpressive-semi-fall season, which turned cold very quickly!  We’ve already had several frosts and have been back into breaking up the ice on the animal water already.

This week, the boys bought a trailer load of hay from our neighbor.  The grass is already gone for the winter and we’re having to feed our animals hay.  They still have to get some of those huge round bales, but they were glad to get the square bales put away in the milk barn. 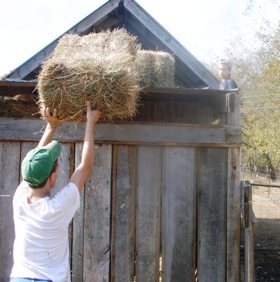 I’ve got some strong boys!  They heaved almost 100 hay bales on top of the lean-to roof of the milk barn.  I suggested that they build some hay bale steps so it would be easier to throw the bales up there—- they both looked at me, not liking the idea, saying that was “girly”.  Ok…nevermind…..they did it their way and were proud of their bruised shoulders the next day!?! 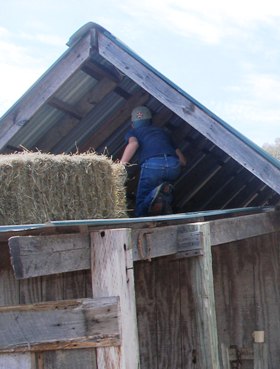 They took turns throwing the bales up on top of the roof and then putting them away in the loft. 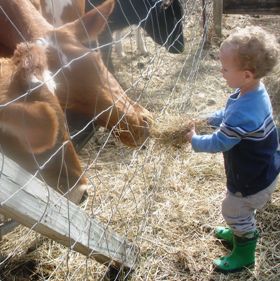 The cows enjoyed the loose hay that the busy 2 year old fed them. 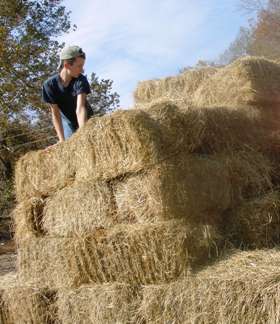 Here are some of the hay bales for the milk cows and sheep for the winter.  We still have more hay to get, but it’s a good start.  Now to conquer the firewood!