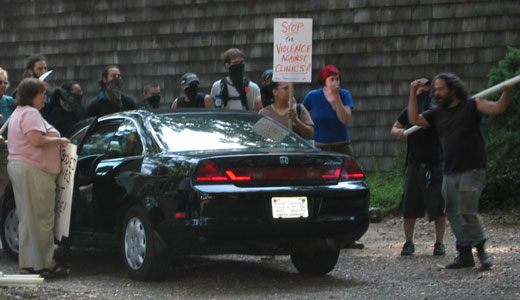 The sign reads “stop the violence against clinics”. The irony is the group holding the sign has just finished threatening to kill the driver of the car and has smashed in the hood and front windshield of his car. Where is the violence coming from here? And what did the guy in the car do to deserve this? 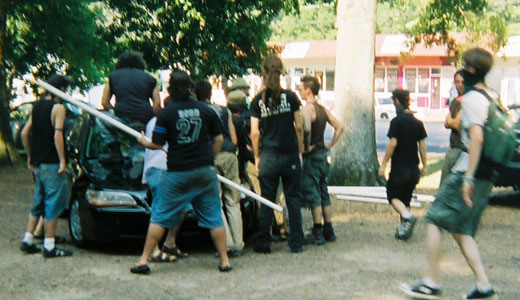 Well for starters he showed up at a national prolife event being held in Jackson, MS this week. That’s right he dared to act on his beliefs and join with other like minded folks to exercise their God given rights, secured by the 1st amendment of The Constitution, to publicly proclaim what they believe.

What does that proclamation look like?  For starters it consist of prayer, public preaching of the Gospel of the Kingdom of Christ, and some times even a display of what abortion actually looks like.  Now this is where the real irony starts to come in.  Have you ever seen an abortion?  Have you seen the results of an abortion?  I have.  It seems to me if someone wants to protest against violence, they really should start inside the abortion clinics, not by beating up people’s cars.

Now as to the police in Jackson, MS.  You know the guys who are suppose to defend and protect?  It seems that they only defend and protect those with whom they agree.  In other words, if you are an anti-life, god hating atheist, then you can threaten people and destroy their property.  But if you are a prolife Christian, then they will confiscate your property and throw you in jail.  That’s right!  If you are exercising your right of free speech and the Jackson Gestapo disagrees with you, they will refuse to provide you with the protection of the law and they will in turn, break the law to silence your message!  Not only did the police refuse to arrest or even make a report in the incident cited above, they actively went after prolifers who were not breaking the law.

These are the facts surrounding the arrest of these two men.  They were holding a sign on a public sidewalk, where free speech is allowed.  They were ordered to leave the area and remove the signs.  When they respectfully told the officer that they had a right to be there, he had their property confiscated and arrested the men. 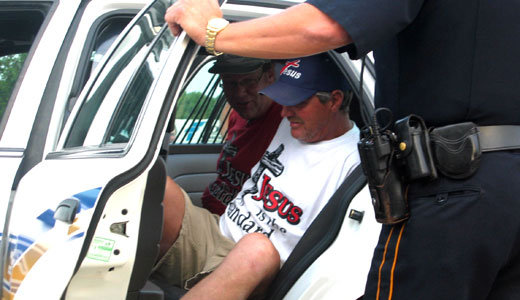 No matter where you stand on abortion, or even displaying graphic signs, you should stand for the constitutional protection of our God given rights.  The Jackson Police department is not above the Law.  They did not write the constitution and they do not have the right to violate it or the rights of the people protected by it!

The actions of the JPD are much more inline with a heavy handed communist regime than with a freedom loving country and they should be held accountable for their actions.  I would urge all who care about the liberty we enjoy to contact the Chief of Police and remind him that the liberties he infringes upon in Jackson are the liberties of the nation and that he should be more cautious with the duties he has been retained to perform.

Keep up with more events as they unfold in Jackson here:
http://jackson.operationsaveamerica.org/index.asp